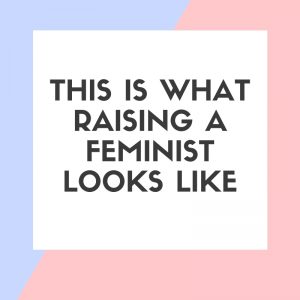 Turns out, because I can’t help myself, I’ve got a project I’m launching next month. It’s a podcast (and accompanying Tiny Letter) which will be the interviews I’m undertaking in preparation for the long-laboured book I’ve been working on about raising feminist sons.

The podcast is called This is What Raising a Feminist Looks Like and the first episode will be live in early October. In the lead up I’m launching the Tiny Letter I’ll be sending our fortnightly to share links to the work of my guests, other articles of interest and events that might be of interest to the podcast audience.

The best way to stay up to date with the podcast is to subscribe to the Tiny Letter and ‘like’ the Facebook page. For those not familiar with the Tiny Letter format it’s essentially a very short and sweet email that comes to your inbox.

Working at the Centre for Youth Literature there is always a project on the go or an annoucement of some kind happening. This one is especially dear to me because I’ve seen how much hard work nine teenagers have put into making it possible. The judges whittled a truly excellent shortlist of ten Australian and ten international YA books down to a final five in each category. They read 20 books, made notes, debated for literally hours and finally came up with this shortlist.

My job is mostly facilitating them getting their books, reading them by our deadline and sitting on a Skype call where I get to watch them partake in what I affectionately call Book Wars, where they argue with each other over the merits of the longlisted titles and negotiate their selections. It’s probably the best job in the world. I mean, I’ve never been employed as a chocolate taster so I can’t confirm it entirely, but I think getting a window into passionate bookish teens discussing the best YA literature of the past year is pretty great.

Now that the shortlist is public it’s time for teens all over Australia to have their say by voting. The winner of the Gold and Silver Inky Awards will be announced in Melbourne on October 2 at State Library Victoria.